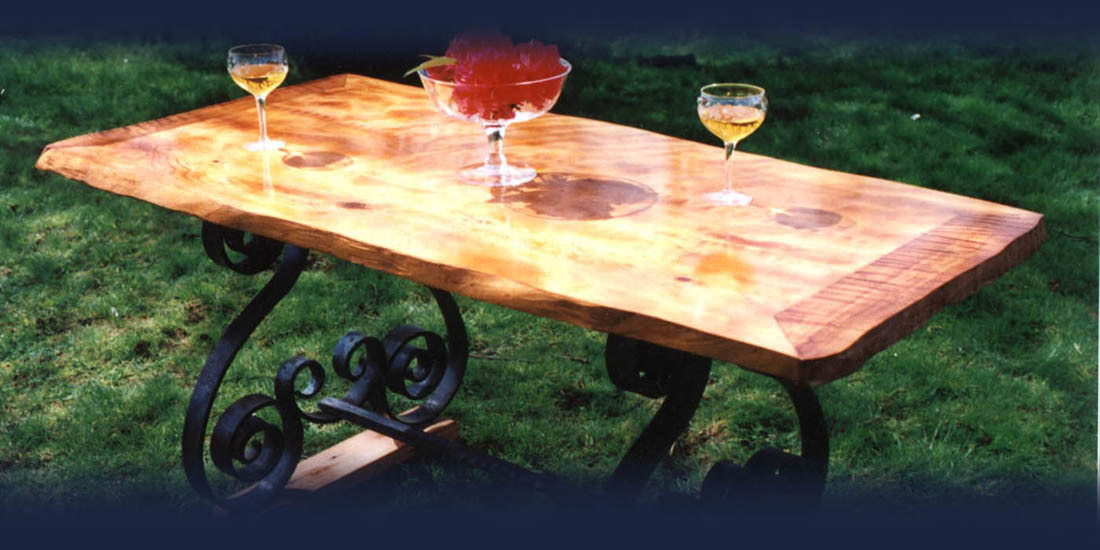 This recent corbel reproduction for a home in Piedmont, California led to an excellent opportunity to experiment with some new techniques to solve old problems. Eric's solution for elegantly and affordably recreating these vintage corbels involved creating a wooden framework and attaching polymer clay. Read more about this project here.

The first project of the Blue Ox Veterans Program was to create an historically accurate replica of the hearse that carried President Lincoln for the final leg of his national funeral procession. The hearse was the centerpiece during the 150th anniversary commemorative ceremonies honoring President Lincoln which were held in Springfield, Illinois May 1-3, 2015. 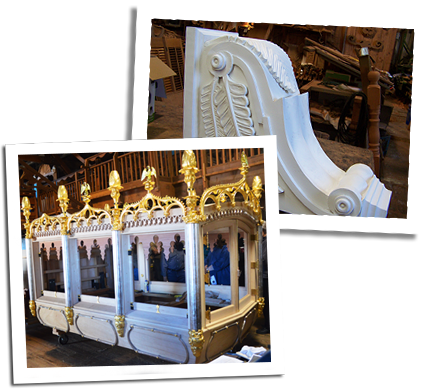 This 4 foot by 14 foot conference table was made from a single slab of redwood from a salvaged log that was downed 100 years ago. The wrought iron legs are finished with a Japanning Finish and the woodwork has twenty coats of a hand-rubbed French Polish finish. This table was presented to the White House as a gift during the time of the Forest Conference in Portland Oregon in 1993, where Eric was one of five people from California invited to testify.

One of two hundred planters made for the White House during the presidency of George H. W. Bush.  These planters have curved staves, an inset bottom and hand-forged steel bands 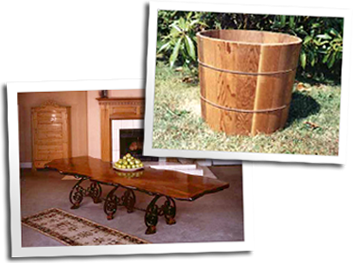 Blue Ox Millworks collaborated on this display that took home a silver medal from the California State Fair in 2006. This is the second time that Blue Ox has worked on the Humboldt County display for the state fair. The last display in 1990 took home best of show.

In 2006, Eric Hollenbeck and the Blue Ox Millworks helped out the local coast guard by donating time and expertise into a restoration of 55 double hung windows at the local station.  The Blue Ox intervention saved the coast guard almost $25,000 that they were able to funnel into other repairs. Photo by Heather Muller, The Eureka Reporter. 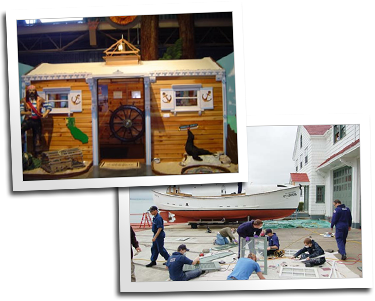 This gazebo was made by the Blue Ox for Eureka's sister city of Kamisu, Japan. The carved newels at the foot of the stairs were hand carved and were designed by Juanita Larson. 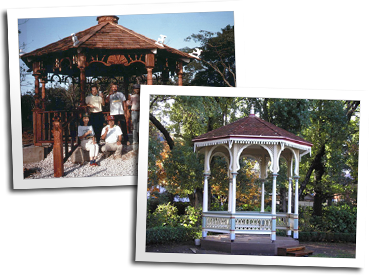 This custom fireplace was built for a home in New York.  Blue Ox collaborated with local wood carver Nate Stipek to construct the two beautiful hard maple corbels.  Blue Ox did the scrollwork, turning, and fabrication, as well as building the custom maple spandrel that runs beneath the mantle. 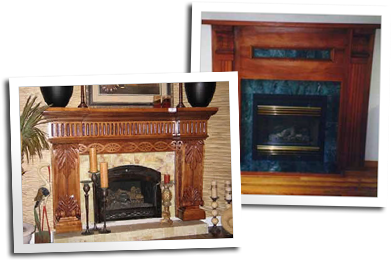 This drum was created specifically for a spiritual leader from the Weott tribe to use in a gathering of many tribes. The unusual size, 36 inches in diameter, was requested so that many drummers could drum together. Incorporated into the drum are old growth Redwood, second growth Redwood and Dawn Redwood, to symbolize the young and the old, and the different tribes that would be using the drum. The key stave is a lovely piece of curly redwood, a gift from the ancestors that guided the creation of the drum. Ken King did the leatherwork on the drum 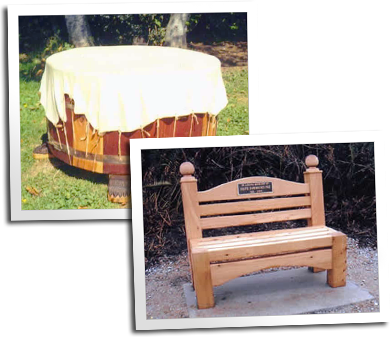 This trolley was built by Blue Ox in 1989 for the Old Town merchants. The new body was built on a bus chassis. Oak seats, brass lamps and flower vases made this a favorite of Old Town visitors and locals alike. The paintings of local scenes and lettering were created by Karen Cooper Shaw.  Photo: Don Forthhuber

The first trolley built by the Blue Ox, this trolley is an exact replica of an 1866 trolley made for Brazil's Emperor Dom Pedro. It was built on a 1978 Ford 3/4 ton Econoline Van chassis. 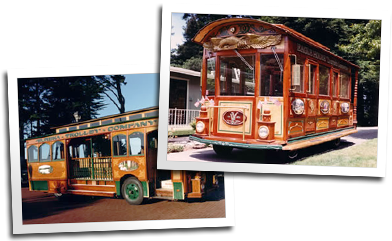