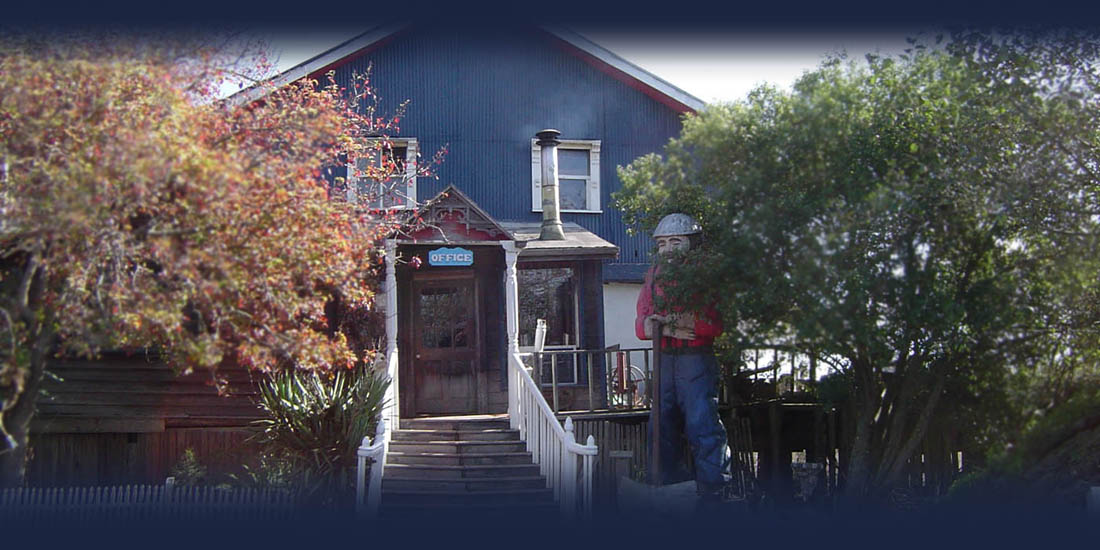 Birth Of An Ox

A long long time ago (roughly 1973) a Eureka native named Eric Hollenbeck set out to found a salvage logging company with 3 partners and a $300 bank loan.  With those $300 they purchased a used chainsaw, a set of chokers, half a tank of gas, and a little blue truck that they dubbed Ophelia Bumps. Eric (a forest veteran from the age of 15) had an immense amount of respect for the natural habitat, and this fledgling logging company soon got a reputation for having one of the cleanest environmental records in Northern California.  It was so clean in fact that they soon got the contract to do salvage logging for the state park service around Humboldt. 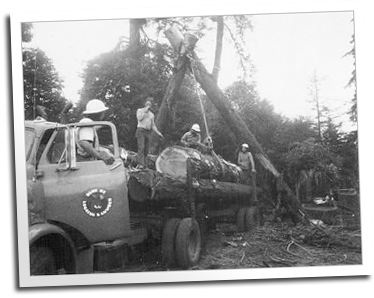 For three years, the boys rented the old North Mountain Power Company building for $50 a month in order to store their truck and cables.  Built in 1904, the building had been one of the first power plants in Humboldt County and had later taken turns as a trolley station, a shipwright's building, and even a dune buggy factory. By 1973 it was completely condemned.  To make matters worse, the property was flooded four months out of the year.  But the bank offered 100% financing (a deal no salvage logger could refuse). Blue Ox bought the property with payments of $600 a month and the stipulation that they make one noticeable improvement to the property per month. 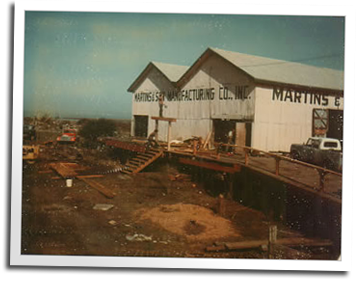 When the housing crash hit in the early seventies, the bottom dropped out of the timber industry.  Overnight, many of the mills in Humboldt County closed their doors and refused to take in more logs.  Eric and his new wife Viviana decided to dedicate their energies toward manufacturing, and began turning out prefabricated sheds.  Between building sheds and turning their old salvage logs into fence posts, Blue Ox was one of the few timber related companies to survive the crash. By this point, Eric's other partners had gone their separate ways and Eric and Viviana moved forward bravely into the world of manufacturing.

(At Right): 1970s era photo of a prefabricated shed built by Blue Ox during the housing crash. With the help of these sheds, Blue Ox survived the housing crash and began turning their attention toward custom millwork. 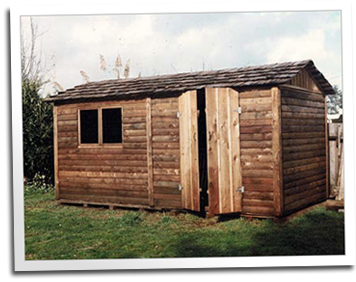 As the other mills in Humboldt County began to close down, Eric went through their "bone piles" collecting antique equipment for the construction of his own Victorian era mill.  He wanted to preserve for future generations a piece of American history that was about to be lost, but more importantly he wanted to have a way to cut up his logs!  Blue Ox soon housed one of the last functioning 52 inch circular sawmills left in operation .  With the introduction of their 1905 Orton single sided planer, they were turning out quality finished lumber.

(At Left): The Blue Ox Millworks mill was assembled in the late 1970s and with a few changes is still in full operation today. The mill features a 52 inch circular sawblade as well as a large band saw. The mill allows the Blue Ox to make lumber with proper Victorian dimensions (most modern two by fours are actually 1.5 x 3.5) 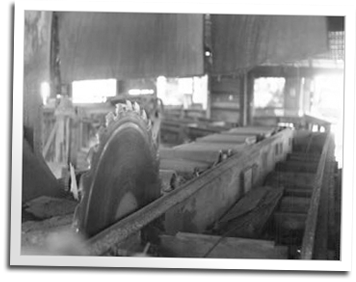 The Touch of a Craftsman

As more and more older tools entered into the Blue Ox family, it became very clear that there was something special being built in that old building beside Humboldt Bay.  Now our tool family has expanded to include almost all of the Victorian era trades, but we still specialize in the same things that got us here, quality woodworking and a respect  for our environment. Whether it's running gutter on our 1902 four-sided molder, or cutting that perfect piece of gingerbread on an 1886 treadle-powered scroll saw, Blue Ox treats every piece of wood that comes through our shop with the love and respect to which it is entitled.  That love is apparent in all of our products.

(At Right): Eric Hollenbeck adds hand carved detail to some decorative scrollwork in the fabrication room. The scrollwork is duplicated from plans from a vintage carousel. 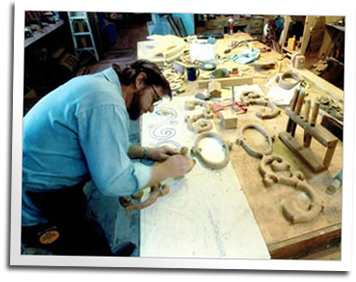 As years passed Viviana insisted that Eric open his shop to a more national customer base.  Jobs started pouring in from Unalaska, Alaska to Jekyll Island Georgia, from Kamisu, Japan to Boston Massachusetts. Eric has made pieces for state parks, historic cathedrals, Russian East Orthodox churches, and two governor's mansions, and he has worked for the White House twice.  Tourists at the Blue Ox have included senators, representatives, cabinet members and foreign dignitaries, and Eric has met the president of the United States on two occasions, even being taken back to Washington DC to be honored in President Clinton's Earth Day speech. 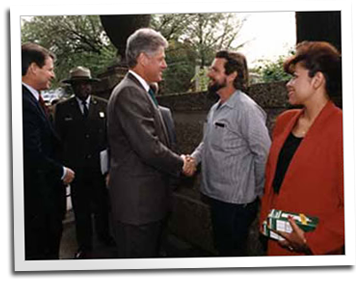 It has always been one of Eric's principle beliefs that craftsmanship techniques need to be shared.  That is one reason that although he has invented several processes he has never patented any of them.  To this purpose, the Blue Ox Millworks opened its doors for tours in the Summer of 1991. Our operation has grown quite a bit over the years, and the tour now encompasses many trades of the Victorian era, including Blacksmithing, Ceramics, Plaster, Printing, and of course all of the wood working trades that have made the Blue Ox famous.  In recent years workshops have been added for group tours at an additional charge, so that large groups can blacksmith a nail or make their own ceramic tiles.

(At Right): Blue Ox's logging skid camp includes a bunk house, a theatre, and of course the cook house. Blue Ox School students use the cook house for the canning of foods. 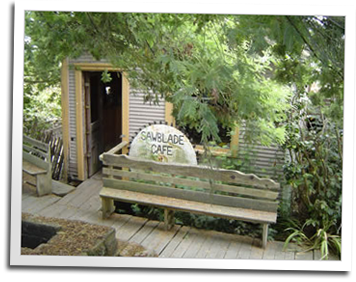 In 1989, the Blue Ox Millworks began hosting area students for the first time.  Through a partnership with the Humboldt Office of Education, this program was expanded in 1999 to include a full time high school.  Students of the Blue Ox spend three days of their week in a regular classroom setting, and spend the remainder of their days at the Ox participating in project based learning.  After 4-6 years they graduate with a regular high school diploma and a valuable trade.  Some of our students go on to become carpenters, cabinetmakers, blacksmiths or mill workers, keeping valuable skills alive and becoming an integral part of our community.

(At Left): Two Blue Ox students work on a project in the print shop. This 1890's era printing press gets a lot of use from the students. They make their own yearbooks, as well as printing poems, postcards, and things for the gift shop. 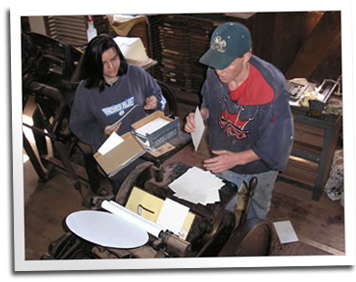 A Haven for the Arts

In 1995 the Blue Ox Millworks expanded its historic park division with the first of its now annual events celebrating craftsmanship around the world.  Craftsman's Days (held on the first weekend after Thanksgiving) now brings in several thousand visitors to the Blue Ox each year.  This event brings together traditional craftsmen from around Northern California to showcase their wares and explain their trades to the public. These craftsmen often include blacksmiths, weavers, bookbinders, jewelry makers, glass blowers and a variety of other trades.

(Far Right): Two craftsmen give a demonstration in the Blue Ox boatworks during one of the historic park's annual Craftsmen's Days events. 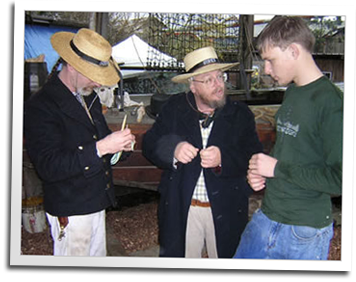 Babe and Blue are Belgian Blue oxen trained to work together in yoke. Now fully grown, they weigh 2,400 lbs. each and stand well over 5 feet tall. Thank goodness they are gentle giants!  These two are the corner piece of a full collection of animals, including horses, geese, birds, cats, and the friendliest dogs you will ever meet.

(At left) Eric walks with Babe and Blue, the Blue Ox Millworks oxen. 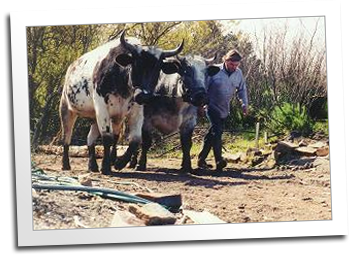